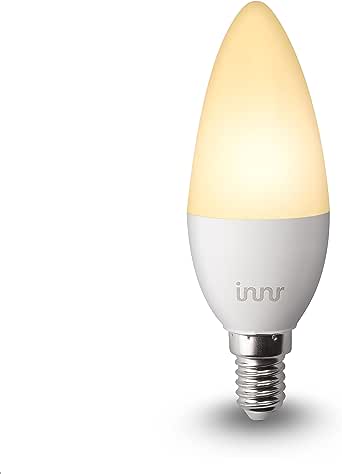 Jo the bulb
1,0 von 5 Sternen Innr lamp has non-existent range compared to Hue products.
Rezension aus dem Vereinigten Königreich vom 14. September 2018
Verifizierter Kauf
When I first tried the lamp, in three different fixtures, it was completely dead, even after trying the 'factory reset' routine. Tried once more this morning, and suddenly it started working. I followed the Hue pairing instructions (start the lamp search, *then* turn the Innr lamp on) with no issues & the lamp paired correctly.

However, as soon as I moved the lamp to the new location, in a porch fixture, it became 'unreachable' on the Hue system. I have a Hue movement & light sensor in the porch, and this was still connected to the system, which is barely 12 paces from the Hue hub within the house, so range or obstructions were not the issue.

I then placed a spare Hue white lamp in another fixture next to the 'unreachable' Innr lamp, and when the mesh network kicked in, both lamps came onto the network & were fully controllable. However, as soon as I unplugged the Hue lamp, the Innr lamp became unreachable again. As a comparison, unplugging the Innr lamp had no effect on the Hue lamp, which stayed fully connected.

It appears that however Innr have built their Zigbee connectivity into the lamp, the range is absolutely tiny compared to the Hue & Ikea Trådfri lamps I have elsewhere, making them unuseable unless (pointlessly) next to other lamps.

Update (04.11.18): On seeing my comments, Innr contacted me & offered a new lamp to test. Although, this one worked straight out of the box & paired quickly with the Hue hub, it still suffers the same range problems as the original lamp: it is still 'unreachable' when used in the porch fixture, which is less than 7m from the hub, and when I tried it in a bedside lamp which was one floor directly above the hub, it became highly erratic in whether it would respond or not. In comparison, a Hue lamp in a similar fixture next to it worked reliably each time. As this is two lamps I have tested now, range really does seem to be an issue with the Innr lamps.
Lesen Sie weiter

Dazaster
4,0 von 5 Sternen Good but not perfect.
Rezension aus dem Vereinigten Königreich vom 22. März 2018
Verifizierter Kauf
Works well, though the range seems shorter than for the philips bulbs that I have.

Each Zigbee bulb seems to act as a repeater, so this bulb only works when other bulbs in between it and the hub are switched on. (i.e. have power, not necessarily lit)

Doesn't affect me too much, but worth noting if you are planning to install the bulb more than around 25 foot from the hub.

Greenstead
2,0 von 5 Sternen Not good
Rezension aus dem Vereinigten Königreich vom 6. Dezember 2017
Verifizierter Kauf
I thought this was a cheaper replacement for a Philips bulb.
It's not. It will work with Alexa and Hue if thats all you want.
You have to place it so close to the Hue hub it makes no sense.Not practical.
Also these Innr are not approved with Apple HomeKit so limited if you want to expand to Apple HomeKit.
Lesen Sie weiter
2 Personen fanden diese Informationen hilfreich
Nützlich
Senden von Feedback...
Vielen Dank für Ihr Feedback.
Wir konnten Ihre Stimmabgabe leider nicht speichern. Bitte versuchen Sie es später noch einmal.
Missbrauch melden
Rezensionen auf Deutsch übersetzen

T. Nolan
5,0 von 5 Sternen Stopped Dimming with Echo Show 2
Rezension aus dem Vereinigten Königreich vom 29. November 2018
Verifizierter Kauf
This worked perfectly for a couple of weeks but now it will NOT dim via the Amazon Echo Show 2nd gen. Not sure if it the bulb or the echo? All I know is it doesn't work any more.

Amazon Customer
5,0 von 5 Sternen Bargain smart builbs
Rezension aus dem Vereinigten Königreich vom 14. November 2018
Verifizierter Kauf
Bit wary of purchasing these due to some of the bad reviews, but too a chance.