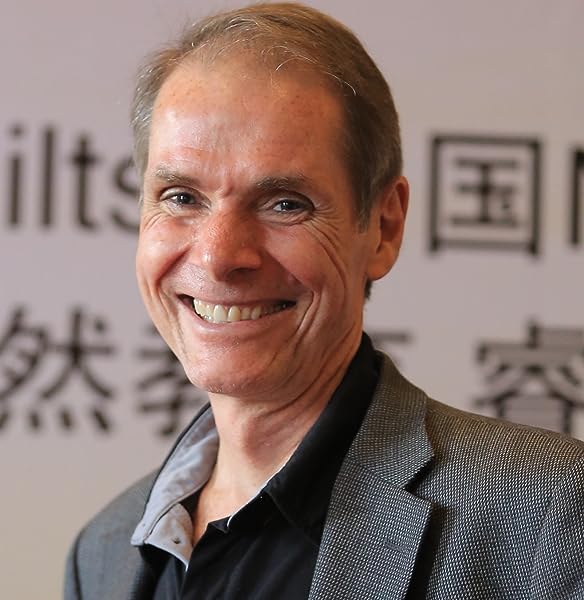 Sean P. Durham
2,0 von 5 Sternen Basic Knowledge about what belief is
Rezension aus Deutschland vom 8. Februar 2022
Verifizierter Kauf
It's the usual problem with many of these NLP books - they are transcripts that include all the humming and hawing of the conversation that took place between Robert Dilts and his guests. The incidental exchanges in conversation don't serve the reader in deepening their understanding about the subject.
I tried to read it because the subject of belief is central to our motivations and meaning in life, but to be honest, it becomes tedious to read trivial exchanges between two people who are being recorded with a microphone. I'll give it another go with my cup of coffee , one day when I'm bored. I really don't understand all the fuss about Robert Dilts and his books - he needs an editor.
Lesen Sie weiter
Eine Person fand diese Informationen hilfreich
Nützlich
Missbrauch melden
Rezensionen auf Deutsch übersetzen

TonyD
3,0 von 5 Sternen Demonstrates how NLP should be used in therapy.
Rezension aus Deutschland vom 8. Juni 2000
In this book, Robert gives the reader a firm idea of how and when beliefs are formed and the true power that beliefs can have upon every aspect of a persons being. Throughout this book, I noticed myself thinking that I was receiving good information about beliefs but very little in the applications of NLP. This book is structured from basically a transcript of a seminar where the subjects were seemingly psychologists and serve hardly any true practical value for means of demonstration in how to allow someone to change their beliefs. What I mean by this is, his subjects immediately dropped into trance at will and used statments like, "I have an identity complex with..."...These are statements you're not going to hear from a typical patient. Many of the examples he used in changing peoples beliefs were very vague and you're still left wondering what to do with all the knowledge you've been given. Overall, this book focuses on beliefs and what they are and attempts to talk about changing them but does so poorly and NLP is only slightly used. I would recommend this book after you've read some of the much more useful books by John Grinder and Richard Bandler such as Trance Formations.
Email comments/questions welcome.
Lesen Sie weiter
3 Personen fanden diese Informationen hilfreich
Nützlich
Missbrauch melden
Rezensionen auf Deutsch übersetzen

Thomas J. Humpton
4,0 von 5 Sternen Detail Explanation of Beliefs and How to Change Them
Rezension aus Deutschland vom 27. Mai 2000
"Changing Belief Systems" is a thorough review of beliefs and how to change them, from a perspective afforded by Neuro Linguistic Programming (NLP). Robert Dilts has, as always, taken a difficult subject and translated it into a readily understandable model. The book was a logical progression from logical levels, to how we represent a belief internally, and from simple beliefs about capability to core beliefs and beliefs about our own identity. All the while, the author explains the unique relationships of beliefs and belief systems, and how we can go about changing conflicting, or other, beliefs so that they support us. I recommend the book for those interested in an efficacious model of beliefs. It is educational and practical, although somewhat dry reading.
Lesen Sie weiter
Eine Person fand diese Informationen hilfreich
Nützlich
Missbrauch melden
Rezensionen auf Deutsch übersetzen
Alle Rezensionen anzeigen

Joseph Augustine
5,0 von 5 Sternen 15 years of magic...and it shows.
Rezension aus dem Vereinigten Königreich vom 29. Januar 2018
Verifizierter Kauf
Coming two years after James and Woodsmall’s Timeline Therapy (1988) and attributed to a series of innovations with John Grinder that also resulted in the Meta Mirror technique, Dilt’s physical time lining is a pattern of organisation that adds further to the richness of his stellar patterning work on strategies called NLP Vol 1. This time round the important concept of logical levels makes a first appearance, and the techniques of turning Failure into Feedback, Re-imprinting (the past), and Identity/Beliefs Integration are explained in the context of seminar demonstrations.

A belief is defined as consisting of three parts: a ‘cause’ leading to an ‘effect’ or ‘evidence’ based on a ‘value criterion’ (the criterial equivalence of importance). The same evidence can be met by two different criteria. For example, punishment causes motivation, but its evidence as a motivator might not work for someone if a different value criterion is held such as the sanctity of internal feelings.

Bandura’s concept of ‘self-efficacy-expectation’ is critical to understanding how our beliefs about future performance shape our responses. The concept is based on the observation that the incremental seeding of skills during the conscious incompetence stage (Burch) plateaus out the gap between our high expectations and the mind’s timely succumbing to the infallible reality of not meeting those expectations. The problem attitude stemming from this ‘choice point’ is shown to be based on either a/combination of hopelessness (behavioural outcome), helplessness (capability) or worthlessness (belief/identity). The pivotal finding of the research is that even if all the positive (conscious) aspects of thought are put in place, in the end “what gives the visualisation meaning is the belief.” Therefore, holding a negative limitation about capability is likely to impact on the success of an interventional technique. Dilts then goes on to describe the four types of hidden impasse the psyche uses to put up vital blocks to any healing work. These are the ‘smokescreen’’, lack of ‘critical mass’, a ‘red herring’, and the ‘plausibility’ factor.

The vast bulk of the book concentrates on introducing and explaining the following four techniques: -

1. In order to counter a negative belief about capability the snappy title of Failure Synesthesia into Feedback Strategy is demoed which has some similarity to the patterning (especially of mapping across) covered in NLP Vol 1. The key concept here is noticing how the different modalities (Ad, Vc, Vr, K etc.) are bundled together into a ‘synesthesia molecule’ by the subject. The best metaphor I can find to describe the so-called molecule effect is the higgledy-piggledy jumble of graphical letters and images an adolescent grafitti artist might be spurned on by their feeling responses to produce. There is the tendency for the conventional onlooker to view these dabblings as somewhat messy and disorganised; and to carry on the analogy further, the aim of the strategy is to separate and sort out the loose and disorganised representations into their proper accessing cues. The ultimate aim of this exercise is to produce new relationships (or meaning comparisons): “in which, instead of tearing each other apart, the more images you have the stronger the feeling and the louder the voice of support, and the more brighter the memories.” This is rather like becoming a Banksy, turning a once inchoate and unsophisticated series of renderings into a well defined work of art that reinforces its message in clear, articulate and simple terms.

2. Dilts next introduces his past Re-imprinting Technique by adopting a relational organising element with the use of the time-line. The concept of re-imprinting is based on Lorenz’s experiments into geese (1964) detailing the unconscious role-modelling (imprinting) of significant others. The methodology of this approach is to replace the scar with a solution by asking the subject to identify the most important generalised choices (behaviours) of what “everyone” -including others at the time of the original imprint experience - needs at the appropriate logical level, and then to anchor these before taking them back to the critical location on the time-line and inserting them in as “re-imprints” (usually visualised as a beam of light sent back across time). A TOTE process of switching between testing in dissociation, and adding resources before experiencing their change from the associated position (in both the subject and other) is played out.

In other words the subject steps off the time line, walks back to the imprint experience, steps into position of the person who needs the resource and relives the imprint experience from their point of view incorporating the new resource. Asking the subject to step off the time line, out of the imprint experience, and updating their generalisations they would now choose to make from the new experience becomes a useful exercise none to say the least:”if the (inner) child knows what resource that person needs, they can prevent over-generalisations in the future, by distinguishing between a person who has resources and a person who doesn’t.” As a last step, the subject takes the position of the younger self and walks all the way up the time-line to present, experiencing the changes made by the re-imprinting - something similar to a domino effect.

3. Belief Systems Conflict Integration is a technique that is applied to two conflicting beliefs especially in resolving two identities usually representing a before, and after change. The first step is to look at the future identity of the subject and find out what is stopping it from being fulfilled, and then attempt to find the common objective by searching for inclusive values that supports both identities, i.e. asking what are the resources each is needed by the other? The final integration of resources are facilitated by physically moving them between the two identities, and bringing them into the physiology of the other position with the help of anchors and the visual squash technique.

4. The meta-mirror is offered as an excellent tool for looking at the way we respond to ourselves as a mirror for what the other person is doing. This is based on one of NLP’s presuppositions that you can only change someone else’s behaviour by changing your own responses first. The technique involves imagining the person in front and naming their behaviour (in 2nd position) then naming the imaginer’s own behaviour (1st position) before moving to 4th position (outer observer) where it is noticed how the inner observer (3rd position) is commentating on the first position, i.e. saying “how do I relate to myself in reference to the other person?” The trick to this technique is to switch around the 3rd person reactions with the first position observations so a different level of understanding response is gained between 1st and 2nd positions; then putting yourself in the position of 2nd and viewing yourself through their eyes before reassociating into revised 1st is a great way to notice how reactions and points of view are able to shift. With the aim to continually switch perspectives and add choices of responses at the appropriate logical level, eventually it is hoped, “any conflicts are ironed out as the subject feels the relationship with the other becoming more balanced and functional.”

The material offered in Changing Belief Systems with NLP strongly relates to how the logical levels of conceptual experiences (beliefs, values and identities) preframe concrete interventions at the environmental (anchors), behavioural (techniques) and capability (strategies) levels. It also points to a break with the the purely cognitive aspects of first generation NLP and could be said to incorporate certain aspects attributed to a space-time continuum! For example:“you are not the content of the experiences that happened to you. You are your resources now” has to my mind become a guiding slogan for a whole heap of self-help books that have been published in the intervening years up to the present, including Oprah’s revolution.

On a personal note it was hard not to be touched by the humanity and deft skills shown in Dilt’s strength, his mind, his heart, his soul and his G.od (his logical levels) in helping Linda, Carla and Barbara which on a number of occasions almost appears like magic; and above all in recounting the process of recovery he gives rise to with his own mother, Patricia.
Lesen Sie weiter
5 Personen fanden diese Informationen hilfreich
Missbrauch melden
Rezensionen auf Deutsch übersetzen