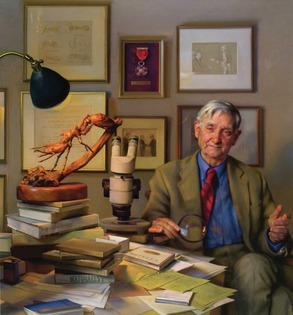 A fine memoir by one of America's foremost evolutionary biologists...erudite, elegant, and poetic. E. O. Wilson defines biophilia as 'the innate tendency [in human beings] to focus on life and lifelike process. To an extent still undervalued in philosophy and religion, our existence depends on this propensity, our spirit is woven from it, hopes rise on its currents.' Scientifically demonstrating this human propensity would be a task beyond the scope of today's biology, and Wilson wisely eschews that course. Instead, he relies on his own experiences and feelings as a field biologist, cleverly interweaving them with the facts, history, and philosophy of evolutionary biology and an eclectic set of cultural observations.--Paul R. Ehrlich "Natural History"

E. O. Wilson is the entomologist Curator of the Museum of Comparative Zoology at Harvard. His science writing for the general public has won him the Pulitzer Prize and his scientific publications have won him the highest honors American science can bestow. He is well equipped to engage a subject dear to nature-lovers which until now has not been identified as a species trait--biophilia. The freshness of Wilson's approach lies in its freedom from the obsessions of the environmentalist movement... While he shares the conservationist ethic of environmentalists, and seeks to impart its practical imperatives, he eschews cultism... Let this highly readable book then be commended to all biophiliacs and technocrats.--Hiram Caton "Times Literary Supplement"

There's more to this unbuttoned and intellectually playful book than its plea for a conservation of ethic and the preservation of animal species in all their diversity. We get, for example, several autobiographical glimpses into the background of Professor Wilson... We see Professor Wilson as a boy growing up in the Florida panhandle... Elsewhere he astonishes us with a description of the mating dance of the male Emperor of Germany bird of paradise, and the degree of genetic congruity between pygmy chimpanzees and Homo sapiens.--Christopher Lehmann-Haupt "New York Times"

Wilson's own empathy with things illuminates these essays with fresh perceptions of everyday matters... They are masterpieces of prose style... Wilson moves fluidly among minute observations of life forms ranging from leaf-cutter ants to birds of paradise, artfully pausing for a philosophical reflection here and a folksy anecdote there.--John Wilkes "Los Angeles Times"

Edward O. Wilson is Pellegrino University Professor, Emeritus, at Harvard University. In addition to two Pulitzer Prizes (one of which he shares with Bert Hölldobler), Wilson has won many scientific awards, including the National Medal of Science and the Crafoord Prize of the Royal Swedish Academy of Sciences.
Beginnen Sie mit dem Lesen von Biophilia (English Edition) auf Ihrem Kindle in weniger als einer Minute.

J Nunez
3,0 von 5 Sternen High expectation
Rezension aus dem Vereinigten Königreich vom 4. Januar 2011
Verifizierter Kauf
I had great expectations for this book and after many students quoted it to me in their essays I decided I had to finally read ir. Is it worth it? YES Its not the best of reads but it presents some interesting ideas that have since been developed by other authors (e.g. Last Child in the woods). It was ground breaking in its day but I think some of the principles it lays out could possibly be argued better.
Lesen Sie weiter
5 Personen fanden diese Informationen hilfreich
Missbrauch melden
Rezensionen auf Deutsch übersetzen

Chris Pritchett
5,0 von 5 Sternen Excellent condition
Rezension aus Kanada am 7. September 2021
Verifizierter Kauf
It was described as used with notes written in it, which it is and has, but it is in fantastic condition. Very happy with my choice to buy used over new. Thanks!
Lesen Sie weiter
Missbrauch melden
Rezensionen auf Deutsch übersetzen