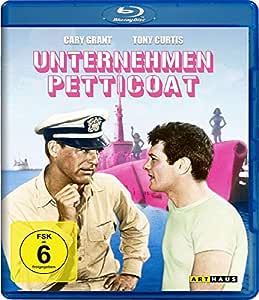 cora
5,0 von 5 Sternen Screwball Comedy at its Best
Rezension aus dem Vereinigten Königreich vom 5. Dezember 2018
Verifizierter Kauf
This is really a highly enjoyable little family film with the laughs coming thick and fast. Despite the wartime setting, it's all lighthearted and fun. The confined space in a submarine makes for awkward situations, but there is none of the claustrophobia of other submarine films. Cary Grant manages to remain classy as the commanding officer even when his boat boat is pink on the outside and a maternity ward on the inside. Tony Curtis is hilarious as his resourceful lieutenant. It's all good clean fun that should keep the entire family nicely entertained on a wet winter afternoon. The DVD is fine. Both picture and sound are very nice for a film from the time. Subtitles are not available on the DVD I bought.
Lesen Sie weiter
4 Personen fanden diese Informationen hilfreich
Missbrauch melden
Rezensionen auf Deutsch übersetzen

ChaplinF
5,0 von 5 Sternen Tony Curtis AND Cary Grant, in top form ... in HD, whats not to love
Rezension aus dem Vereinigten Königreich vom 18. Februar 2020
Verifizierter Kauf
Wow, as a huge fan of both Grant and Curtis this has always been a favourite film of mine, Grant of course was a master of comedy and a very slick actor, Curtis himself was no slouch and a far better actor then he was ever credited for with a comedic ability that keeps Grant on his toes. Its great watching the two of them on screen together, comic sparks flying and the younger Curtis certainly having a whale of a time with the old master in this very funny film. It looks beautiful on bluray, so colourful and crisp.

It begins in 1959, when Rear Admiral Matt Sherman (Cary Grant), commander of all US submarines in the Pacific, comes to visit a last time an obsolete submarine, the USS "Sea Tiger" (a fictional name - no US Navy ship was ever so named), prior to her departure for the scrapyard. Admiral Sherman used to command USS "Sea Tiger" during the WWII and he wants to say goodbye to his old valiant ship. Once on board, he begins to read the old captain's logbook, containing the description of the first and most memorable months he spend with USS "Sea Tiger" during the wartime.

We move then to the war time, the 10 December 1941, to one of US Navy naval bases in Philippines. During a vicious sneak Japanese air raid USS "Sea Tiger" was grievously damaged. And then the film really begins, with the desperate attempts of the whole crew to make their boat seaworthy again, so she can escape from Philippines and go to Australia. When coordinating those efforts, Captain Sherman will have to deal not only with the damage already suffered and with the constant enemy threat but also with two more unexpected calamities: a newly affected to USS "Sea Tiger" horribly incompetent executive officer, Lieutenant Holden (Tony Curtis) and five Army nurses, who are to be evacuated to Australia. Even worse, one of the nurses, Second Lieutenant Dolores Crandall (Joan O'Brien), an otherwise nice and clever person (cute like a button too) is also UNBELIEVABLY clumsy and accident prone - in fact the crew of USS "Sea Tiger" will soon consider her as a greater threat than Japanese destroyers...)))

Enough said here about the story, the rest is for you to discover.

It was actually Tony Curtis who had the idea for the scenario and proposed a first draft to Blake Edwards - he was also the one to propose Cary Grant for the role of Captain (later Rear Admiral) Sherman. His inspiration for this choice was the 1943 film "Destination Tokyo", in which Grant already played brilliantly a tough but humane, non-nonsense sub-marine commander.

US Department of Defense and US Navy adored the scenario and contributed generously all kind of assistance including no less than THREE WWII-era submarines, which were then still being held in reserve: USS "Balao", USS "Queenfish" and USS "Archerfish". All the three of those subs participated very actively in WWII in Pacific, but the most famous of them was the USS "Archerfish", which on 29 November 1944 sunk Japanese giant aircraft carrier "Shinano" (68 000 tons!). This was and still remains until now the LARGEST warship ever sunk by a submarine...

This film is a pure comedy, not trying to get serious at any moment and therefore even if it is war, nobody on board of USS "Sea Tiger" dies during the film (well, with the exception of Seaman Hornsby) - and the damage this valiant ship inflicts to the enemy is marginal, at best...))) The whole tone of the film is light-hearted and merry, but Blake Edwards avoided the trap of veering into full burlesque and slapstick - and therefore realities are actually mostly respected. The Japanese shoot real munitions and drop real bombs, even if their aim is mostly horrible. The Military Police, although clearly made of not very bright characters, nevertheless tries to do its job seriously. The high ranking officers say and do things that (mostly) make sense and they too really try to do their job.

The efforts to repair and maintain USS "Sea Tiger" also seem pretty realistic, even if they too offer some occasion for humour, because of the very, very poor shape in which initial Japanese attack left this valiant but unfortunate ship. The bureaucratic troubles affecting the crucial supplies and spares were actually inspired by some REAL war time correspondence between infuriated and desperate sub-marine captains and (mostly) competent and well-meaning but frequently completely overwhelmed by war time chaos logistics personnel...)))

For a comedy this is a surprisingly long film - it lasts 124 minutes - but I definitely didn't feel the time passing. To the contrary, at the very end I was very much game for more and indeed in 1977 there was an attempt to make TV series based on this film ("Petticoat Affair") - but it was far from the level of the original and was cancelled after one and a half season.

There is also a logical explanation for the length of this film - USS "Sea Tiger" must travel the whole way from Philippines to Australia while damaged and therefore she goes at slow speed and must stop from time to time for more repairs. To underline the poor condition of the ship Blake Edwards added a recurrent acoustic effect, which is usually not associated with submarines - it opens and closes all successive chapters of this most peculiar odyssey and made me roar with laughter every single time...)))

But the greatest treasure of this highly successful comedy is the kind of humour it uses. Based both on dialogs and on situations, it is very intelligent, subtle, merry, light-hearted and especially NEVER vulgar! There is no villains in this film (well, except for the Japanese, but they always remain at distance) and even if people sometimes say not very clever things or do some not very clever things, nobody is actually ridiculed. In fact, this film is GENTLE and HEART-WARMING from the very first to the very last scene - and that is a greatly precious thing.

The art of doing such gentle and optimistic comedies seems to be somehow lost, as there is very few of them in recent times (I can think only of "While you were sleeping"). I tried to imagine for a moment how would a modern remake of "Operation Petticoat" look - and I shivered with horror...

Bottom line, this is a great treasure of cinema and one of the best comedies I ever watched. A film to buy, watch and keep. Enjoy!

(1) I had to go with (non)xeric, which means (not)adapted to dry environment, because good luck finding another adjective beginning with "x", that could even remotely be relevant when describing this film...
Lesen Sie weiter
Missbrauch melden
Rezensionen auf Deutsch übersetzen

Malcolm McDonald
4,0 von 5 Sternen a PINK submarine???
Rezension aus dem Vereinigten Königreich vom 12. August 2013
Verifizierter Kauf
This one of the most enjoyable comedy war films ever made.Quite how war is made into comedy is showing no war at all and this is how it works.I remember seeing this as a kid,and always thought it was called"The Pink Submarine!!".Cary Grant plays a captain who is given the command of the oldest worn out submarine vessel in the fleet.He must get it up and working and underway with the bare essentials and a rag tag of odd characters as his crew.Tony Curtis is assigned as Grants first officer and is basically,the king of cons"A scrounger!!".Along the way,Grant decides to have the sub repainted,but has not got the right color paint,so gets the crew to mix the paint to get a color to cover the newly fitted,with old crap,sub,the results are hilarious as the sub ends up pink with no chance of an overcoat.Along the way,Grant and Curtis pick up stranded nurses from a soon to be occupied japanese island.Love insures,as does many a joke at the nurses expense,not to forget a memorable corset used as a pump spring for poor Arthur O,Connels engineer chiefs equipment.A super maritime comedy which has stood the test of time.A classic.
Lesen Sie weiter
Missbrauch melden
Rezensionen auf Deutsch übersetzen