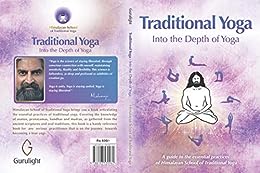 Traditional Yoga: Into the Depth of Yoga: A guide to the essential practices of Himalayan School of Traditional Yoga (English Edition) Kindle Ausgabe

This book is brought to you by the Himalayan School of Traditional Yoga (HSTY) to articulate the essential practices of traditional yoga that cover the knowledge of asanas, pranayamas, bandhas and mudras, as described in the ancient scriptures and oral traditions. This book is a handy reference book for any serious practitioner on their journey toward becoming an accomplished yogi.

HSTY is dedicated to propagating traditional yoga, i.e. the essence of yoga as per the original teachings codified in the scriptures by Maharishi Patanjali, beyond boundaries of country, religion, gender, class and wealth.

In HSTY we do not look at yoga as exercise, but rather as a set of practices that help take one back to their original state - increase the awareness of one’s body and align the system to allow the expansion of consciousness.

HSTY’s yoga lessons are presented in the original form as they existed aeons ago, with no change in form or presentation. Many contemporary Yoga schools pay more attention to the element of fitness, or the physical aspect, thus making Yoga practice suited to the specific interests of groups. Further, the ancient practices have been modified to support these specific interests thus reducing the holistic efficacy of yoga geared towards the body, mind and soul. The focus of these practices is on activity rather than awareness; seeking out rather than seeking within.

At its core, traditional yoga is all about simplicity and being natural. A yogi is natural, i.e. lives in a state in which the body, mind and soul are in unison. This leads to alignment, health and equanimity, a state where one is happy and without anxieties, anger or stress. When practising yoga, a sincere yoga practitioner gets fully in tune with his/her body and its subtle processes, thus quieting the mind.

HSTY remains loyal to the original teachings marked by the simplicity and depth of practice. Hence, Traditional Yoga is easy for people to adopt into their daily lives and benefit from practice. The systematic practice of Traditional Yoga helps people break free from life's complexities and obtain relief from physical, mental or psychosomatic illnesses. Furthermore, healthy and happy people can contribute significantly to the upliftment of society.

Through Traditional yoga, our physical body and subtle bodies are being cleansed and prepared for the high current energies that pass through the system of those who are ready for the ultimate blossoming of consciousness, the ultimate promise of yoga – the unity consciousness and state of yoga as a path and destination.