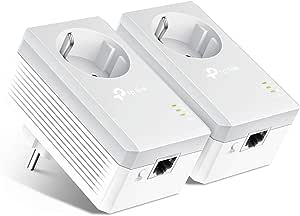 R. F. Stevens
5,0 von 5 Sternen Excellent basic network extender when no possibility for another Ethernet cable or wifi
Rezension aus dem Vereinigten Königreich vom 26. August 2016
Stil: Ohne SteckdosePattern Name: 600MbpsVerifizierter Kauf
The basic simplest 500Mbps TP-Link PA4010 Powerline kit works a treat; we didn’t need pass through sockets, nor extra wifi, nor gigabit speeds, just enough bandwidth for a Smart TV. Initially I plugged them into adjacent sockets, let them synchronise with the pairing buttons, and then moved the distant one to its new home and it all just worked. So simple. Wonderful.

If one wishes to make the system more secure than the default, or to change the names or passwords on each unit, or to add more units into the power line, or to change the priority mapping, or to monitor QoS (Quality of Service) etc, then the mini-CD has a full pdf User Manual and a Management Utility that can run on the PC. This also allows one to upgrade the firmware etc in the devices if TP-Link produce updates.

I wanted to connect my new Smart TV to the network, but the wifi from one side of the house to the other was not good enough, too much steel and masonry in the way, so while it was marginally OK for phone and tablet, the TV just sulked, and adding another Ethernet cable was going to be a nightmare. Hence this network extender.

It matters that the pair are on the same ring main because the signal does not seem to pass at a high enough speed through the MCBs in the fuse box. The signal is also too slow through the surge protectors etc in the Belkin mains extension block that powers my core IT stuff. So the pair are using a couple of the normal 13A sockets on the upstairs ring main, full speed, no problems even though they are about forty feet of wire apart.

I've not noticed any interference on any other equipment, nor has anything else interfered with this net connection - the pictures from BBC iPlayer HD are stunning. It was supplied with a CD with info and software, and some microscopic paper instructions, but these are not really necessary as the pair simply just worked. There are three LEDs on each unit; power, Powerline, Ethernet, and the steady on or off or blinking and colours are intuitive.

Note that Az in their infinite wisdom has mixed up all the reviews for the five different types of TP-Link power-line adaptors, so don’t be surprised if some do not seem to be relevant to what you are looking for.

One minor niggle I would never normally mention, but I ordered this from Az early on Monday morning as an 'In Stock' item and today late Friday evening it still has not been dispatched, whereas the identical item I am now using was bought over the counter at Maplins on Monday afternoon, because I only saw how long Az were going to take AFTER I had placed the order. I can still use the Az one when it eventually arrives next week so I did not cancel.

The Az bits arrived today, and yes a third unit (and fourth) can be added to the ring main and work happily with the other two, just press the pairing button on an original member of the network and then the button on the additional one.

Note that if a standard network switch is added to the distant Ethernet port then the power saving mode will not happen, because even if nothing is happening on the switch it will still be polled by the router and will keep the Powerline awake. I just added a third Powerline instead of the switch, and then all three can sleep when the connected devices are off.

The Utility shows that the data rate between them and also a PA4020 (where there had been two PA41010) with the master plugged into a Gigabit network is between 339Mbps (3 metres) and 313Mbps (14metres) depending on the distance (PC-router-PA4010-PA4010 etc). Note that the Utility on the TP-Link website for the PA4010 is newer than that for the PA4020 and it works perfectly well on both.

Be aware that these can overheat if anything blocks the ventilation. I had a problem where occasionally one shut down after about half an hour and discovered that it was only when some clothes were hanging next to it. Moving the TP-Link to an unobstructed place cured the problem.
Lesen Sie weiter
22 Personen fanden diese Informationen hilfreich
Nützlich
Senden von Feedback...
Vielen Dank für Ihr Feedback.
Wir konnten Ihre Stimmabgabe leider nicht speichern. Bitte versuchen Sie es später noch einmal.
Missbrauch melden
Rezensionen auf Deutsch übersetzen

Robert A. Chalmers
5,0 von 5 Sternen Plug and Play. Very Happy
Rezension aus dem Vereinigten Königreich vom 8. September 2016
Stil: Ohne SteckdosePattern Name: 600MbpsVerifizierter Kauf
Brilliant bit of kit. I have four of these now. Just plug them in to the power sockets, plug your computers into the ethernet ports with the supplied cables, and I now have 2 Macs, 1 PC, and the Router (Sky) all connected across the house. PC in the garage, two Macs upstairs in widely separate rooms.
Works like a charm. I have DHCP of course on the router, but I prefer a fixed IP in one case, so all I had to do was change the mac:address for the main Mac so that a refresh finds the correct IP each time, and presto - refresh - and it worked. Too nice.

Wireless is nice, but it was never strong throughout the house. Now I have what appears to be a very fast signal right through the system.

I didn't bother fiddling with the "join a secure network" part of the set up. I'm not on a secure network. The Wireless part of course has the WEP/SID things operational, but as this isn't a bank etc - the firewall is good enough. So the Ethernet set up is good.

telstar
3,0 von 5 Sternen Brilliant
Rezension aus dem Vereinigten Königreich vom 15. Oktober 2016
Stil: Ohne SteckdosePattern Name: 600MbpsVerifizierter Kauf
Had this up and running in minutes it was so easy, now instead of relying on wifi I am able to connect my upstairs PC to my downstairs router. Brilliant.
UPDATE.... I have used it for a while now and the flaws are starting to show. It works brilliantly for a while the cuts out and I have to disconnect it and start again. annoying when purchasing something.
Lesen Sie weiter
4 Personen fanden diese Informationen hilfreich
Nützlich
Senden von Feedback...
Vielen Dank für Ihr Feedback.
Wir konnten Ihre Stimmabgabe leider nicht speichern. Bitte versuchen Sie es später noch einmal.
Missbrauch melden
Rezensionen auf Deutsch übersetzen

Mr G M
5,0 von 5 Sternen TP-LINK TL-PA4010KIT AV500
Rezension aus dem Vereinigten Königreich vom 30. November 2016
Stil: Ohne SteckdosePattern Name: 600MbpsVerifizierter Kauf
This is the third TP-LINK TL-PA4010KIT AV500 that i have bought to extend the internal network to fixed devices. WiFi is only used on mobile devices like laptops, tablets etc. Three of the Powerline adaptors are on a different power circuit with the furthest about 20m from the consumer unit. It still manages about 40Mbits/s according to the TP-Link software utility, plenty for streaming HD videos. One of the adaptors on the same power circuit as the host adaptor manages about 200Mbit/s over a distance of 10m. For best results the adaptors should be plugged directly into the wall power sockets, I had a reduced quality service when one was pluggedinto an extension block sharing other loads.
Lesen Sie weiter
Eine Person fand diese Informationen hilfreich
Nützlich
Senden von Feedback...
Vielen Dank für Ihr Feedback.
Wir konnten Ihre Stimmabgabe leider nicht speichern. Bitte versuchen Sie es später noch einmal.
Missbrauch melden
Rezensionen auf Deutsch übersetzen

Best thing about the TP-LINK kit is that you can just plug it in and leave it, no setup is required. I would definitely recommend.