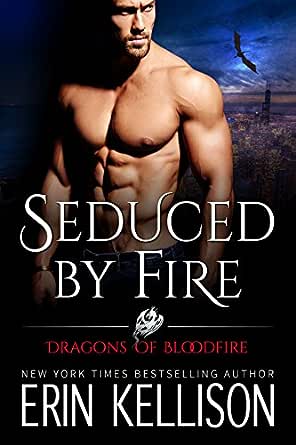 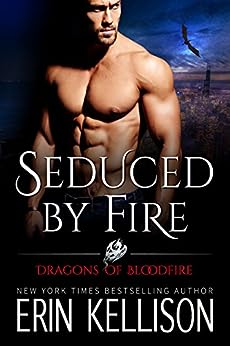 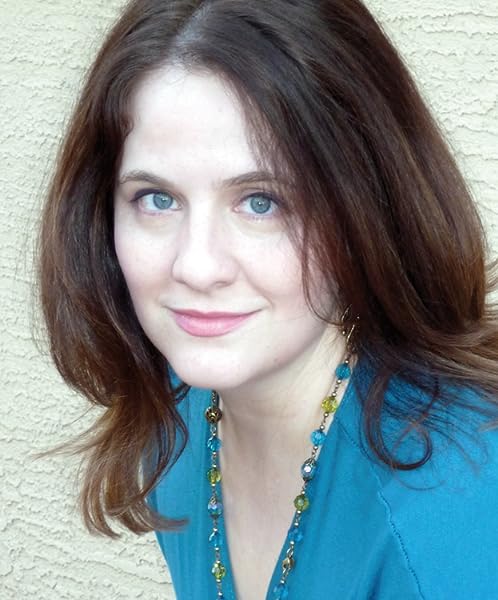 Erin Kellison is the bestselling author of the Dragons of Bloodfire series, the Reveler series, and the Shadow series. She writes urban fantasy, paranormal romance, and science fiction romance. She loves other worlds and visits them as often as possible via movies and books and her kids’ imaginations. When not daydreaming or writing, she’s goofing off with her family in sunny Arizona. -- Dieser Text bezieht sich auf eine andere Ausgabe: paperback.

xyz
2,0 von 5 Sternen Didn’t work for me
Rezension aus dem Vereinigten Königreich vom 18. Dezember 2019
Verifizierter Kauf
Loved the first two books in this series, but this one I really struggled to get through. Although it’s set in the same fab world, I didn’t like these characters, the backstory with her dead husband was unromantic and there was very little focus on the romance / characters feelings. Without wanting to give anything away I felt some of the plot twists were just a bit too sad for this genre. Couldn’t see why the couple got together, didn’t feel any sexual tension, and they were lucky rather than heroic to win in the big showdown. Felt like the author had got bored of it all but had to finish.
Lesen Sie weiter
Nützlich
Senden von Feedback...
Vielen Dank für Ihr Feedback.
Wir konnten Ihre Stimmabgabe leider nicht speichern. Bitte versuchen Sie es später noch einmal.
Missbrauch melden
Rezensionen auf Deutsch übersetzen

Printjunkie81
5,0 von 5 Sternen A combo of my 2 fave things, hot nerd and dragon
Rezension aus Australien vom 4. September 2017
Verifizierter Kauf
I wont give too much away but i did read this book in one sitting. I have an assignment due but i couldnt tear myself away from this story.
Its one you need to read in order so as to get some of the references better but i could almost stand alone. I recommend making sure you have a few spare hours before getting started.
Lesen Sie weiter
Nützlich
Senden von Feedback...
Vielen Dank für Ihr Feedback.
Wir konnten Ihre Stimmabgabe leider nicht speichern. Bitte versuchen Sie es später noch einmal.
Missbrauch melden
Rezensionen auf Deutsch übersetzen

Cliente Kindle
5,0 von 5 Sternen The plot thickens in the 3rd installment of Bloodkin
Rezension aus Italien vom 9. August 2017
Verifizierter Kauf
Mack and Aura have been in love for more than a century, but due to external circumstances have been living separated lives. Some secrets however cannot be buried for ever and Aura will need to trust Mack and their renewed feelings to survive and have a chance of a common future. Each book of Dragons of Bloodfire introduced a main couple of H/h and some secondary characters. The overall arc grows from book 1 on and two of the three members of the Triad have been changed.
Who will be the next dragon? Hopefully Locke will have his own book too! :)
Lesen Sie weiter
Nützlich
Senden von Feedback...
Vielen Dank für Ihr Feedback.
Wir konnten Ihre Stimmabgabe leider nicht speichern. Bitte versuchen Sie es später noch einmal.
Missbrauch melden
Rezensionen auf Deutsch übersetzen
Weitere internationale Rezensionen laden

The Good - Ryder is such a good guy and he truly loves Aura. The fact that their love had to wait for so long makes it that much more romantic. I enjoyed the word play between the humans and "Ted" - Grace is a HOOT! I hope since we see so much of Locke and Gutter in this story, they will have their own stories soon. I liked that this story builds off of Warrick and Samantha and we got to see them a time or two.

The Bad - I can't say I'm a huge fan of Aura, she kinda reminded me of Mary from Downton Abbey - she's not horrible but could easily be fickle. I never could decide if I liked Oscar or not - I understand his motives though I'm not a "the end justifies the means" kinda person.

The Ugly - I never felt satisfied in that I "know" the characters. I re-read Warrick and Samantha's story before reading this one and there is so much character development that you get a real sense of them and who they are, but I never felt that way about Ryder and Aura. I never got truly invested in them because I never got to know them. It all felt very rushed.

JLW
4,0 von 5 Sternen 3 1/2 stars: Great world building and unique dragon hero but the heroine is TSTL!
Rezension aus den Vereinigten Staaten vom 11. August 2017
Verifizierter Kauf
I'm rounding up from 3 1/2 stars here. I've enjoyed other books in this series for both the world building and the quality of writing and definitely look forward to the next installment.

Pros:
- I can't remember when I've ever read about a dragon who is on the nerd side. He hoards books! Love it. Also, his character was unique because he gravitates towards non-Bloodkin. I really enjoyed the interaction with his human friends.
- Speaking of human friends, really appreciated their intellect and also how they resolved the gifts situation they were unknowingly a recipient of. I really liked the daughter who was sassy but not in an annoying way. Would love a novella on her.
- I'm glad that the heroine was a dragon. I disliked (and thus didn't go further than the sample) the previous book of Warwick and the human girlfriend as I don't like it when the relationship between the H and h are so unequal in terms of power. Really dislike those relationships where the female is so dependent on the male for protection.
- I enjoyed the small references or inclusion of characters from previous books such as Locke and the witch reality show

Cons (spoilers below):
- If you didn't read the previous book with Warwick then you might feel lost with regards to what exactly is happening and why with a Tempus. So don't consider this book a standalone
- Although Magnus (Ted) is supposed to be a very unusual dragon it still seemed way out of character for how much he was splitting up the hoard they were searching for - giving a share to everyone on the expedition? Even the human daughter Grace who while entertaining didn't contribute to the finding of the hoard (not that she was a bad character, but just didn't have any knowledge)? Dragons are supposed to be greedy and this felt too much of a break from the world building by how generous he was being. I wish at least the author had shown the other members of the expedition, particularly the humans, to be contributing some way to finding and opening the hoard so that their share in it made more sense.
- Aura, the heroine. She's been added to my list of TSTL female leads of all time. She's the reason for a full 1 star off and if the quality of the writing hadn't been so good, I would have ranked this book a 3 because of her. First thing that bothered me about her character was another break from the world building regarding dragons. This is a race of creatures that talks about eating their enemies, killing family members for inheritance, and killing their young as a matter of normal behavior AND yet she can't kill her psychopath son (her description by the way) whom she knows has killed humans and will continue to kill humans for the simple joy of it! Her sicko murdering son has lived for 100 years and she knows he's been killing people since he was a child. After he escapes his confinement, she should have alerted other Bloodkin instead of futilely hunting him alone. As a result of keeping him secret, he does murder many more people. If she had gotten other dragons involved, human lives would have been saved but nooo, we're supposed to believe she didn't want to see her insane son killed and so in her mind it's better if lives are lost while she bumbles along trying to capture her son rather than quickly alerting the Bloodkin race who could effectively stop the son on sight. Lastly, the situation of Oscar, her 300 year loyal super servant whom she makes swear a blood oath to her son - not only did she just enslave the poor guy to a crazy ball and chain, she further endangered Magnus by not telling him that Oscar's loyalties were now bound to the enemy.

Vallrie Sweeny
5,0 von 5 Sternen How do I love this series let me count the ways!
Rezension aus den Vereinigten Staaten vom 16. August 2017
Verifizierter Kauf
First and foremost everyone is smart and witty even if they are crazier than bedbugs.
Second the heroine has good grasp of logic. I read a lot and you would surprised at the empty brain pans these girls have.
Third the dragons are dangerous and focused on their hordes. The dragons cultivate and grow their collections as if it was a garden.
Fourth as the author stated "Dragons are not men pretending to be dragons. They are dragons pretending to be men".
Wow that is a huge difference in demeanor from the rest of Dragon Shapeshifter venue.
Lesen Sie weiter
4 Personen fanden diese Informationen hilfreich
Nützlich
Senden von Feedback...
Vielen Dank für Ihr Feedback.
Wir konnten Ihre Stimmabgabe leider nicht speichern. Bitte versuchen Sie es später noch einmal.
Missbrauch melden
Rezensionen auf Deutsch übersetzen

Aura Ortiz has been running from her secrets for years, but when a Tempus instigates a hunt for Aura as a traitor, she decides to go to an old friend for help. Ryder Magnus has avoided his dragon side for longer than he can remember, but he is outed in front of his class and the world as he begins to shift. However, the media mistakes him for a wolfkin instead of bloodkin. Ryder is joined by his human friend and colleague, Walter, a vampire servant of Aura, Oscar, and Aura herself. Aura convinces Ryder that their only hope is to find the Bastard’s Eye.

If you love dragons, wolves and ancient artifacts, this story is for you!

Bookaddict
4,0 von 5 Sternen I really like her books.
Rezension aus den Vereinigten Staaten vom 23. September 2017
Verifizierter Kauf
I am a Dragon fan and she is one of the few writers of Dragon books that actually have a story. I don't have to skim thru pages and pages of explicit sex that most paranormal writers use to fill a book. I can relax and enjoy a book,not worried about when I have to start skimming through the book.
Lesen Sie weiter
Eine Person fand diese Informationen hilfreich
Nützlich
Senden von Feedback...
Vielen Dank für Ihr Feedback.
Wir konnten Ihre Stimmabgabe leider nicht speichern. Bitte versuchen Sie es später noch einmal.
Missbrauch melden
Rezensionen auf Deutsch übersetzen