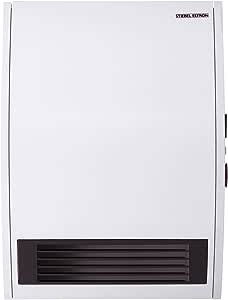 Mrs. E. Szendzielarz
3,0 von 5 Sternen A Heater With Some Design Issues.
Rezension aus dem Vereinigten Königreich vom 1. Februar 2017
Verifizierter Kauf
The heater was delivered in record time, 4 days ahead of the date advised. However the heater itself has a number of issues.

Firstly, I noted on arrival that there was a small bulge on the front (curved) fascia. It was not the result of transit damage, because the bulge was from the inside out. It's not terrible, but it's noticeable in shade or part light. When I opened the heater, I discovered the cause, which is an internal design flaw.

The internal duct housing is too high and, also, too sharp. The two internal corners should be radiused/chamfered to accommodate the shift between the front fascia and those corners during transit. As they are, however, the corners have impacted the front fascia from the inside, even though the delivery carton, internal polystyrene packaging etc were all undamaged.

The second major issue is the proximity of the horizontal mounting bracket in relation to the cable hole. The bracket and/or cable hole should have been justified by at least a centimetre, so as not to coincide. However, for reasons I can only attribute to sheer stupidity, their Design Engineer has opted to place the two in identical positions. In other words, it is impossible to mount the unit on the wall without risk of chafing between bracket and cable.

NB The bracket is delivered in its punched (unfinished) state, meaning that the edges of the bracket are razor sharp. In fact, I had to use extreme care not to slice my hands while installing same, because the edges are so hazardous. This is highly undesirable from an electrical safety standpoint.

Finally, the Company's after-sales service is appalling. I tried to mail three of their EU addresses via their customer feedback form. None worked; my mail just sat there. I decided, instead, to try the German (what I thought was their headquarters) address. I received a curt, but polite mail (in German) advising that I should follow the warranty procedure. I mailed back (this time in German) to say that I was disappointed with such a response, and that had it been my Company, I might have been more appreciative of such feedback from my customer. I added that I would have taken the time to apologise, at least.

I received a further mail this morning (in English from the same person), advising that I had contacted the German office, so there is nothing they can do! I have just now replied to that mail, with a long explanation of the design flaws outlined here. I have also included photos of the damage caused by those flaws.

Would I recommend this heater? The short answer is, no. From an output perspective, it might turn out to be the best thing since sliced bread. But apart from the poor design/build quality, there seems to be a lack of interest when it comes to customer dissatisfaction.
Lesen Sie weiter