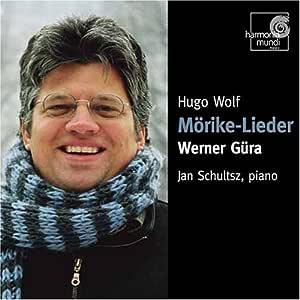 Santa Fe Listener
5,0 von 5 Sternen A light tenor voice is unusual in Wolf, but Guera's artistry wins out
Rezension aus den Vereinigten Staaten vom 1. Oktober 2013
Verifizierter Kauf
Note: I attached this review to the latest bargain reissue of the original 2005 release. It now comes in a flimsy cardboard sleeve without texts, so buyer beware. amazon has also placed the review with the more expensive original Cd, presumably with texts - the cover shows Guera wearing a muffler.

It's always fascinating to see how a singer overcomes natural drawbacks in the voice. Werner Guera has such a light tenor that he wouldn't seem well suited to Hugo Wolf's expressive intensity. In fact, I'd have to go back decades, to Hughes Cuenod, to remember a voice like this seriously attempting to sing Lieder. But Guera has all the expressive technique needed to sing Schubert's equally demanding Schwanengesang, which has almost exclusively been the province of lower voices, so I came to this CD of Morike-Lieder with high hopes.

And a combination of art and compatibility wins out. Guera is naturally suited to the lighter songs like Die Gartner, which is carefree and buoyant; he can encompass the long crescendo that brings Er Ist's to a joyous conclusion; even the storminess of Begegnung comes of well once the pianist, Jan Schultsz, takes care to scale it down. It was also canny to bring the Morike collection in the first place, since its 53 songs afford a range of expression that isn't like the suffering and angst of, say, the Spanish songbook. Guera also knows that he can't play it safe, so in a powerful song like Der Tambour (so close in mood to one of Mahler's soldier songs in Des Knaben Wunderhorn), the singer unleashes the full force of his voice. He triumphs in the spooky Der Feuerreiter, rising to a terrifying wail where stronger voices employ sheer power.

Ian Bostridge has a bigger international career than Guera, equipped with a voice similar in timbre and probably louder, but I much prefer Guera's artistry, which doesn't veer into over-emphasis, and the sound of his voice is lovely, as opposed to the nasal, reedy twang of Bostridge's. One drawback to the present CD is the resonant ambience of the hall - was this an attempt to make Guera's sound appear bigger? - which gives the piano too much echo. Musically, I usually admire Schultsz when he partners with Guera, but his plai-spoken playing misses a good deal of the subtle half-lights in Wolf's accompaniments.