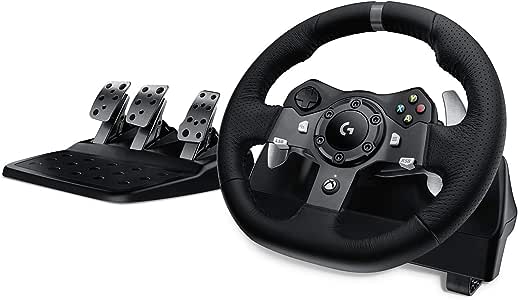 Honest Reviews
4,0 von 5 Sternen 4 stars
Rezension aus dem Vereinigten Königreich vom 30. Januar 2018
Verifizierter Kauf
Edit Jan 2019 - now almost 2 years down the line and still going strong. Also been using the shifter for a while so I'll add a short review of that at the end

Edit Jan 2020 - now 3 years later and it's still working perfectly, not really run into any new issues that I can think of so still very much recommended

Edit September 2020 - After 3 and a half years, the potentiometer in the throttle has finally given out. However, if you have a soldering iron and a little experience this is pretty easy to fix, and the replacement part is pretty cheap. I honestly can't fault it too much though, potentiometers don't last forever and I used it a LOT in those 3 and a half years, and continue to use it after a fairly simple fix

I've held off on reviewing this because I wanted to give it a proper testing, and I've now been using this pretty heavily for a year (largely drifting on Assetto Corsa with some racing here and there, so it's gone through some pretty strenuous testing), and it's so far held up almost perfectly (more on that in a moment). I upgraded from a DFGT, and the FFB is a huge improvement from that, and having a clutch is a huge advantage. I would have liked a few more buttons though, the G29 is much more similar to the DFGT in terms of buttons but I chose this one because it looks less like a toy. Also, I really miss the stick shifter from the DFGT, it sucked as a shifter but it made a great hand brake so it would have been nice to see it return on this.

The biggest problem I encountered is one I've seen a lot in the reviews, so it appears to be a fairly common fault, and that's that after a while the wheel started to develop a squeak when turning left. It was beyond the return period for Amazon however so I decided to just stick with it, it was irritating but the wheel still worked. HOWEVER, after a little while the squeak disappeared again, and it's now working perfectly, so my guess is it's just brand new bearings that needed to be broken in a little. If the problem comes back then I'll edit this, but so far so good.

Another problem was the brake pedal. Some people despise the brake on this, saying it's impossible to use, and I'll admit that when I first got it I was basically unable to use the brakes because they were so stiff, I would press on it and my chair would just roll backwards. However, after some use (and jamming something behind the wheels of my chair, lol) the rubber bumper has softened up and I now don't have any real problems with it, I actually like the feel of it, because the amount of pressure required increases through the travel range you quickly learn to gauge how hard you need to press the pedal, rather than just how far, so it's a little more intuitive if you're used to real brakes (though it's important to note that it still doesn't feel like a real hydraulic brake pedal, it just behaves a little more like one than a simple sprung pedal). And if you don't like it, you can simply remove the rubber bumper and the pedals will be basically identical to the G27

Another thing I noticed is that it does get a little hot when being used heavily. As I said earlier the main use it has seen has been drifting, which puts the motors under a lot more stress than usual, and I have noticed that the casing can start to become a little warm, though so far it hasn't caused any problems, I just let it cool down for a minute or so every now and then if it's being used heavily.

Using it on Win 10 as well, I saw a few 1 star reviews saying it doesn't work on Win 10 but I assure you that it does, and has done flawlessly for the past year.

All in all, while this wheel did have a few problems, I would probably still recommend it, you could buy a cheaper wheel but they're generally not worth it. Another decent alternative in the same price bracket is the Thrustmaster TMX Pro. Both are good choices (Edit - the TMX Pro is now pretty expensive compared to this)

I also bought the shifter that you can get for this, and I have to say I'm pretty impressed with it for the price. It did initially feel a little flimsy, but after almost a year of use it still hasn't failed at all. The amount of force required is nothing compared to a real shifter, and you obviously can't feel when the gear doesn't engage properly (though that is a fault common to basically every shifter), so it doesn't feel entirely realistic, but it is so much more immersive using it, even if using the paddles is slightly faster it's worth it for the sense of really driving the car that it gives you. For the shifter alone I would probably also give it 4 stars, with the caveat that if you want as much realism as possible then this probably isn't for you since it does feel so light, so probably 2-3 stars for someone only concerned with realism
Lesen Sie weiter
324 Personen fanden diese Informationen hilfreich
Missbrauch melden
Rezensionen auf Deutsch übersetzen

John Proudlove
4,0 von 5 Sternen So close to perfect...
Rezension aus dem Vereinigten Königreich vom 8. September 2018
Verifizierter Kauf
This should have been an all-time classic product, and was clearly intended to be. I swear the G920 wheel is better made than the one in my Mazda MX-5. It's mainly built from leather-covered steel, and oozes quality, The force feedback is uncannily realistic - paired with a game like Forza 6 the immersion has to be experienced to be believed. One fly in the ointment alone gives the G920 4 stars instead of 5. First impressions of this wheel are that something's wrong with the brake pedal - this is what a friend of mine - who grew up with console racing games - thought. But the product you just unboxed isn't broken - it's built the same way as all G920s. After much Googling it appears Logitech made the brake pedal too stiff while trying to give it a realistic amount of resistance. Some blogs advise opening the pedal assembly to remove rubber bushings but - with Forza 6 at least - the simple solution is to reduce the "outside deadzone" setting to around 70% (my thanks to RaindancerAU on the Forza forum for that). A more general solution is to change the sensitivity of the wheel using Logitech's Windows utility. Logitech must have been aware of this design flaw from the outset but -inexplicably - didn't document it or the workarounds in the packaging. This issue will without doubt have resulted in returns, and tarnishes the image of what I believe is one of the finest gaming peripherals of all time. Despite the drawbacks the G920_totally_ kicks ass, and I'm wiping seat from my brow as I write this. Highly recommended.
Lesen Sie weiter
61 Personen fanden diese Informationen hilfreich
Missbrauch melden
Rezensionen auf Deutsch übersetzen

Lou
5,0 von 5 Sternen The 54 year old man-child loves it!
Rezension aus dem Vereinigten Königreich vom 29. November 2017
Verifizierter Kauf
I bought this for my Dad during the black friday sales- and what he tells me it's an excellent product.

He uses it for both his PC and his X-box and it's compatible for all his racing games.

He was showing off the other day showing how it calibrates each time you switch it on- and my mum has barely seen him since it was delivered.....

I can't say too much about it as I don't play those types of games- but this steering wheel has made a 54 year old man child extremely happy!
Lesen Sie weiter
55 Personen fanden diese Informationen hilfreich
Missbrauch melden
Rezensionen auf Deutsch übersetzen

Martin Dewar
5,0 von 5 Sternen Most fun in years on PC
Rezension aus dem Vereinigten Königreich vom 2. Dezember 2018
Verifizierter Kauf
As long as you download the Logitech Gaming Software from their site you'll have fun with this. The force feedback is very strong compared to my old wheel so I have had to dial it down quite a bit, but that's not a problem. Everything goes together easily and it seems a very strong product and last some time, which at this price I hope it does. The downside is it is not auto recognized by all games but with the LG software running in the background that alleviates this issue. I would seriously recommend this G920 as it is not overly complicated and puts the fun back into driving a sim.
Lesen Sie weiter
21 Personen fanden diese Informationen hilfreich
Missbrauch melden
Rezensionen auf Deutsch übersetzen

The worst experience I have ever had with logitech over the past 4 months trying to get a WORKING G920 wheel has been nothing but a chore.

I have had two of your operators end the calls with no reason, and upon calling back managed to get hold of one of the same ones who offered no explanation at all.

All of your operators have been informed I am autistic and struggle greatly with these issues.

I am now being asked to "destroy" my current logitech product before you will send me another one! This is highly dangerous, as the product is faulty and even if unplugged could cause me injury or worse death!

I have been a faithful customer for over the past 10 years, and the experience of staying faithful to your brand for my racing simulations has been nothing but shocking and I could never recommend your products now knowing that such faults exist and as a company your such unwillingness to fix them.

After 4 wheels and many wasted hours, they now admit they can't provide me with a working product and will have to refund me.