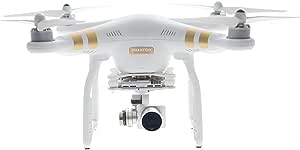 Luis F. Gonzalez
4,0 von 5 Sternen Best drone in the Market. Phaton 3or 4!!!!!!
Rezension aus Deutschland vom 29. April 2016
Farbe: Gold, WeißVerifizierter Kauf
This isone or the best Drone in the maker today, easy to fly with many features. After many months of research and with the new low price Phaton is the way to go...
Lesen Sie weiter
2 Personen fanden diese Informationen hilfreich
Nützlich
Kommentar Missbrauch melden

MR O.
5,0 von 5 Sternen Big Boys Toys R a must, this one is any way!
Rezension aus dem Vereinigten Königreich vom 29. August 2015
Farbe: Gold, WeißVerifizierter Kauf
What a brilliant well thought out piece of kit this is, definitely in the category of "Big boys toys", mainly because of the price , though I'm sure there are youngsters that could fly one of these much better than I ever will, It comes with clear easy to read instructions , safety & battery guide lines, full manuals can be down loaded from dji website, for a more detailed insight to flying it. Once I had read all available paperwork that came with it, charged the battery in the hand set/RC controller and, the drone battery, watched countless video's on YouTube ( which is where I gained most of the helpful information),and also those on the dji website. Before I even attempted to fly the Phantom 3, I updated the firmware in the hand held controller and the drone, that I had down loaded from dji website onto my computer and then onto my micro SD card, slotted that into the drone, even though I followed instructions to the letter, this was unsuccessful in updating the the hand held remote control, but did update the drone, I managed to achieve the remote control update by connecting up my NEXUS 10, downloading the "dji Go app", which is the Pilot view app that links the tablet up to the drone(also use of USB link cable supplied) and allowing my tablet to download the firmware direct to the remote, success finally! The "Go app works very well giving you all the necessary heads up display info including battery status etc, and still allowing almost full vision of what the camera sees. I found I needed to purchase a clamp extension (from Amazon) to hold my NEXUS 10, purely because the clamp on the remote controller did not slide open wide enough for my 10 inch tablet, it would work fine with a smaller tablet or mobile phone, (my eye's aren't as good as they were), so unless you are going to use a 9 or 10 inch tablet you'll be fine with the clamp supplied.Other accessories you might want to consider are: spare batteries, as flight time is a little over 20 mins, or less if you take into account the safety margin to allow return to home flight time & landing safely, depends on how far away you allow it to fly and on weather/wind conditions, One comes with the kit, so you can at least get up in the air and fly! I also bought a lanyard to help support the remote controller, it's not heavy but gave me the added security that it's not going to hit the ground if it slips out of my hand! The controller has a purpose built-in clip holder for the lanyard. A bag or case to transport your Phantom3 around in & Quick release propeller guards are also worth considering, because if you buy prop guards that are screwed to the drone then you will need a very big bag for the drone to be transported in, (either guards are good they will probably save your props from damage or even the whole drone from a "wipe out") with the latter you have to unscrew/screw-up some very tiny screws every time you want to bag-up and move to a different location. A sun guard/shade for your tablet/mobile phone is a must, as in bright sun light you'll struggle to see the screen clearly, and if you can't see whats going on with the drone/battery while in flight you might as well throw it in the rubbish bin, because that's where it will end up any way! One other thing you might want to consider is a larger Gb micro SD card, it comes with a 16Gb micro SD card, but with the 4k camera that will soon become full, but spend a bit extra and get a hi end card with a good transfer rate, one that can handle 4k quality of video/HD photos.The quality of both video & photo is outstanding, the 4k camera aided by the Gimbal gives you a very steady & crisp image. A final note to say my purchase went very well, received a email from the the company in Belgium to say it was on the way and received the Phantom 3 Pro four days later, couldn't ask for better! Thank you CD Alpinsports from one very happy (probi) drone pilot.
Lesen Sie weiter
20 Personen fanden diese Informationen hilfreich
Nützlich
Senden von Feedback...
Vielen Dank für Ihr Feedback.
Wir konnten Ihre Stimmabgabe leider nicht speichern. Bitte versuchen Sie es später noch einmal.
Missbrauch melden
Rezensionen auf Deutsch übersetzen