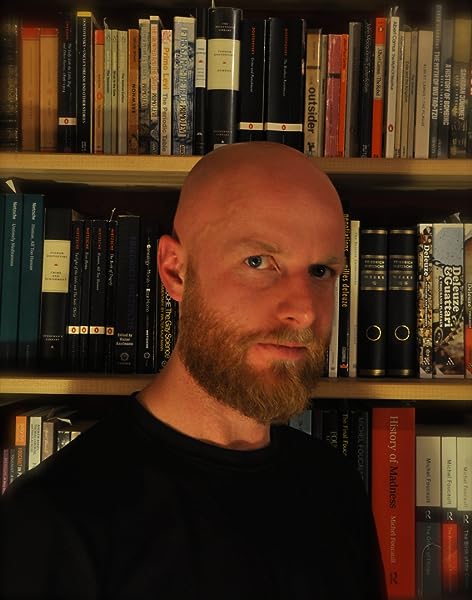 A priest remakes himself from animal flesh. A land surveyor travels into the earth’s crust in search of a boulder. Hauled for centuries it forms a rut, the longest sentence in recorded history.

Black Vellum is a Nietzschean experiment. The priest symptomizes Nietzsche’s analysis and serves as an embodiment, a deviant incarnation, of the philosopher himself. Other figures are encountered in the content of their thought; Schopenhauer, Cioran, Freud, and Bataille enter as minor actors. None are named as such, and their intuitions are allowed to interanimate. Most readings and re-readings of established figures appear bound to the task of moderation, this book attends to their derangements.

“The intellect was only first produced as a result of this diminishment of perception, writes Ansgar Allen in Black Vellum. This is an exquisitely written philosophical tale about human civilization as the quest for order, measurement, and automation—and perhaps, about how nihilism and despair have always fed our fantasies of humanoid machines.” Germán Sierra, author of The Artifact

“A notepad wrapped in black vellum records a descent into a rift valley where an oddly abridged humanity hunkers, replicating its codes through geological time. A story within that story details the Frankenstein-like creation of a meat automaton, designed to render the consolatory function of religion obsolete. Transecting all of this, is a brilliant reflection on the machinic immiseration of the organism and its stalled dreams of transcendence. Allen has distilled the speculations of Nietzsche and Freud into an impersonal meatspace whose soulless protagonist is writing its own suicide note – while time dissolves all, while the space of inscription reveals caverns measureless to man. Black Vellum is the work of an extremely subtle mind, co-opting horror to trace the integuments of a glitching futurity somehow liberated from the traditional impasses of nihilism.” David Roden, author of Snuff Memories

“Black Vellum unspools before the reader like a memory thread with which to weave one’s forgetting of the world, a darkness to navigate the blinding light, a testimony of corporeality that grows and grows and becomes the home of the mind exiled by the body. Within its pages, there are ways of seeing, mechanisms of being, of carrying both oneself and the burdens of the landscape before one’s eyes—the fibers of the world enslaved to its own image and those of what we must weave in its place. Through a rich prose, evocative of the mythological void state in which everything necessary existed all at once, Ansgar Allen creates a mirror-like journal, in the pages of which one can find, beyond a reflection of the self, a recollection of how paths are traveled, and worlds undone.” — Christina Tudor-Sideri, author of Disembodied and Under the Sign of the Labyrinth