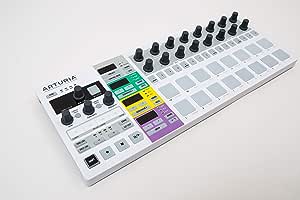 Monkey Tennis
5,0 von 5 Sternen outstanding bit of kit and very, very well made. highly recommended.
Rezension aus dem Vereinigten Königreich vom 18. November 2015
Verifizierter Kauf
Just a superb piece of kit with plenty of potential through adding more leads. Ground loop connector is a nice touch. Very well made and much more solid and heavy than you might think. Pots all feel good and respond very well. They even sense when you are near them and show you the value without having to touch them. Amazing. USB powered so no heavy external power pack, very thin unit and all controls look and feel great. Pads are sensitive and respond really well. No criticisms at all from me. Using it to drive caustic on an android tablet, some volca units and a synth. No timing problems or sync/latency issues at all. Very nice item.
Lesen Sie weiter
6 Personen fanden diese Informationen hilfreich
Nützlich
Senden von Feedback...
Vielen Dank für Ihr Feedback.
Wir konnten Ihre Stimmabgabe leider nicht speichern. Bitte versuchen Sie es später noch einmal.
Missbrauch melden
Rezensionen auf Deutsch übersetzen

Kyle R.
4,0 von 5 Sternen Great Sequencer - Don't buy from AudioDeluxe!
Rezension aus den Vereinigten Staaten vom 10. Juli 2017
Verifizierter Kauf
The Beatstep Pro is a *great* sequencer! Significantly improved my workflow working between vintage CV gear, newer midi gear, and a eurorack system. Works flawlessly with an Octave Cat, Prophet 6, TR-8, and Sequetial Sixtrak. No issues syncing all devices up. The only drawback is that it doesn't have more sequencers...but for the price - can't beat it!

Note: Do NOT buy this from the AudioDeluxe seller on Amazon. The unit I received had clearly been opened before. When trying to register my unit I was told by Arturia that it had indeed been registered to a previous user and I had to go through a whole process to switch it to my own account. You will notice in AudioDeluxe's feedback that several users have had this issue.
Lesen Sie weiter
18 Personen fanden diese Informationen hilfreich
Nützlich
Senden von Feedback...
Vielen Dank für Ihr Feedback.
Wir konnten Ihre Stimmabgabe leider nicht speichern. Bitte versuchen Sie es später noch einmal.
Missbrauch melden
Rezensionen auf Deutsch übersetzen

I was really looking forward, and based on the hype, I wanted to love it, I wanted to use it a lot. But it's been painful from the start.

My context: I also own the Novation Circuit and the Maschine Mikro II, so I have an understanding of controllers and how things can work and feel and look and interact. They are all in the same price range, so hardware and build quality should be comparable. I also own the Keystep, another Arturia product, which I am quite happy with (for the price).

The first thing which annoys me as soon as I turn on the Beatstep Pro: The white pad's LED brightness. Not adjustable, no firmware fixes. It's really blinding me, even in a dim (not dark) environment. When my eyes focus on other gear, they need to re-adjust. It's really that bad. Users had the same complaint with the Circuit, luckily Novation fixed this in a firmware upgrade, and I am happy with the brightness at the lowest setting. I see the same complaints for the BSP, but no response from Arturia.

Next thing is the pad's sensitity: You need to hit them hard. And I mean: Really. Hard. My. Fingers. Hurt. It's easier to trigger them at the corners. It's just impossible to play them melodically / as a keyboard. You need to hammer them like a 20 year old MPC with worn out pads. Some of the pads double-trigger. And since I need to hit so hard, it occasionally even triggers another pad.

I consider these two issues poor product design. They should not be there. Not at this price tag. They kill the fun.

Then there is this other thing: I knew before I ordered that the Beatstep Pro has monophonic sequencers only. Limited, but works as advertised. Okay, I thought, I can create polyphonic patterns with the Circuit or I can use the DAW. But I did not realize just how much I would miss the capability to enter notes per step (and to later add notes per step to correct or change or build the pattern).

What do I mean? Well, with the Circuit for example, you press and hold the step button, and then select as many notes from the keyboard pads as you like (up to 6 in that case). So. Much. Easier. I did not realize how backward this XOX step sequencer editing feels. Toggle step on / off, that's what you get. No less no more. To compare, when I tap a step's pad on the Circuit, it plays back the notes on that step. So that you know "what's inside". And to "toggle" the step, I need to deselect all notes (or use the Clear button). To me, this feels completely natural as an input method. But going back to the BSP, it just toggles the step. It. Feels. So. Awkward.

Okay, my bad, I knew beforehand. But I keep wondering if Arturia could bring a major rework of the firmware for this product. I see a lot of potential. I would even pay for this. The BSP does come with all the hardware to support such enhanced mode of editing. They just did not put it to good use. It's very unfortunate.

As a smaller issue with the drum sequencer, the note values are fixed. So I cannot re-assign values to different drum sample layouts. In the DAW, I need to re-shuffle things (where necessary or supported), other external gear may or may not support this.

Another issue I would like to raise: How can I upgrade the firmware, when I don't own a Windows or Mac system? Other hardware would accept a SysEx dump. I run Linux, and I am not asking for Arturia's Midi Center as a native Linux app. But it would be a nice move if they made sure it's working in Wine, or if they provided an alternative way of upgrading the firmware.

So is the BSP any good? Yeah sure, it's a lot of fun to create sequences and arpeggios. You can create polyrhythms easily (in the drum section). But I can do this with other products as well. Even with some free software.

The BSP comes with a lot of connectivity. That's great if you need it. It's also very easy to select project, pattern, Midi channel. And the rotary encoder concept is great for adjusting pitch, velocity, etc.

But does it stand out as a hardware controller and sequencer, does it justify the hype? I don't think so. I don't even think it is worth the money, due to the poor quality of the wobbly buttons and the useless pads. The otherwise solid build quality does not help.
Lesen Sie weiter
6 Personen fanden diese Informationen hilfreich
Nützlich
Senden von Feedback...
Vielen Dank für Ihr Feedback.
Wir konnten Ihre Stimmabgabe leider nicht speichern. Bitte versuchen Sie es später noch einmal.
Missbrauch melden
Rezensionen auf Deutsch übersetzen

The one star review is for Arturia's horrible support. It's been 3 weeks now and I have not heard anything back. In talking with others, this is common for Arturia support. I don't expect to get a replacement or repair anytime soon, either. I will not be buying Arturia products again.
Lesen Sie weiter
24 Personen fanden diese Informationen hilfreich
Nützlich
Senden von Feedback...
Vielen Dank für Ihr Feedback.
Wir konnten Ihre Stimmabgabe leider nicht speichern. Bitte versuchen Sie es später noch einmal.
Missbrauch melden
Rezensionen auf Deutsch übersetzen